One Thousand Ships with Real-time Buoyancy and NVIDIA WaveWorks 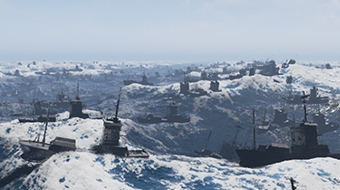 NVIDIA WaveWorks is an extremely realistic ocean simulation which supports a range of sea states from dead calm to full gale. The API is designed for easy integration into today’s game engines and NVIDIA provides a custom branch of Unreal Engine 4 with the feature implemented for reference. But water is boring without boats bobbing around on it. Nejc Lešek, a developer from Slovenia, recently wrote a blog post and video showing 1000 ships realistically traversing the ocean in a variety of weather states.

Making even something like a simple ball appear to float realistically can be complex but simulating many large vessels moving convincingly on a troubled sea is not simple. In his blog Nejc details the steps his simulation takes to simulate the movement of ships in waves that range in height from half a meter up to 50 meters.

1000 ships in sea states from dead calm to full gale.

At NVIDIA we are always thrilled to see the project’s using our technology like WaveWorks. This demo looks fantastic, you can practically smell the sea air. We wish Nejc and his team the best of luck in the future.