A Long short-term memory (LSTM) is a type of Recurrent Neural Network specially designed to prevent the neural network output for a given input from either decaying or exploding as it cycles through the feedback loops. The feedback loops are what allow recurrent networks to be better at pattern recognition than other neural networks. Memory of past input is critical for solving sequence learning tasks and Long short-term memory networks provide better performance compared to other RNN architectures by alleviating what is called the vanishing gradient problem.

The Long Short-Term Memory Architecture consists of linear units with a self-connection having a constant weight of 1.0. This allows a value (forward pass) or gradient (backward pass) that flows into this self-recurrent unit to be preserved and subsequently retrieved at the required time step. With the unit multiplier, the output or error of the previous time step is the same as the output for the next time step. This self-recurrent unit, the memory cell, is capable of storing information which lies dozen of time-steps in the past. This is very powerful for many tasks. For example for text data, an LSTM unit can store information contained in the previous paragraph and apply this information to a sentence in the current paragraph. 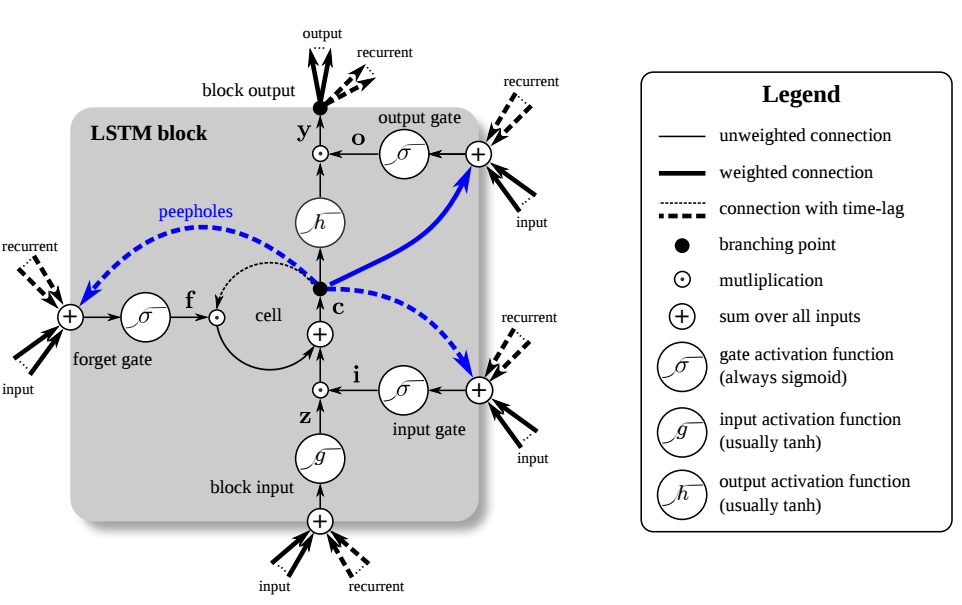 Bidirectional LSTMs train the input sequence on two LSTMs - one on the regular input sequence and the other on the reversed input sequence. This can improve LSTM network performance by allowing future data to provide context for past data in a time series. These LSTM networks can better address complex sequence learning/ machine learning problems than simple feed-forward networks.

A simple LSTM model only has a single hidden LSTM layer while a stacked LSTM model (needed for advanced applications) has multiple LSTM hidden layers. A common problem in deep networks is the “vanishing gradient” problem, where the gradient gets smaller and smaller with each layer until it is too small to affect the deepest layers. With the memory cell in LSTMs, we have continuous gradient flow (errors maintain their value) which thus eliminates the vanishing gradient problem and enables learning from sequences which are hundreds of time steps long.

There are instances when we would want to throw away information in the memory cell, or cell state, and replace it with newer, more relevant information. At the same time, we do not want to confuse the rest of the recurrent net by releasing unnecessary information into the network. To solve this problem, the LSTM unit has a forget gate which deletes the information in the self-recurrent unit, making room for a new memory. It does so without releasing the information into the network, avoiding possible confusion. The forget gate does this by multiplying the value of the memory cell by a number between 0 (delete) and 1 (keep everything). The exact value is determined by the current input and the LSTM unit output of the previous time step.

At other times, the memory cell contains a value that needs to be preserved for many time steps. To do this the LSTM model adds another gate, the input gate or write gate, which can be closed so that no new information flows into the memory cell (see Figure 1). This way the data in the memory cell is protected until it is needed.

The parallel processing capabilities of GPUs can accelerate the LSTM training and inference processes. GPUs are the de-facto standard for LSTM usage and deliver a 6x speedup during training and 140x higher throughput during inference when compared to CPU implementations. cuDNN is a GPU-accelerated deep neural network library that supports training of LSTM recurrent neural networks for sequence learning. TensorRT is a deep learning model optimizer and runtime that supports inference of LSTM recurrent neural networks on GPUs. Both cuDNN and TensorRT are part of the NVIDIA Deep Learning SDK.