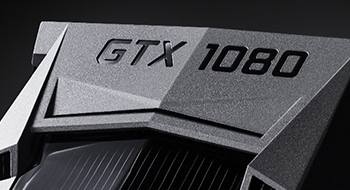 NVIDIA is proud to announce the new GeForce GTX 1080. Based on our revolutionary Pascal GPU architecture, this new GPU is designed to enable the next generation of awe inspiring content from game developers. With support for DirectX 12 and Vulkan graphics APIs, these cards are designed to drive display devices beyond 5K including HDR as well as delivering the performance required for truly immersive VR.

The GeForce GTX 1080, is a quantum leap in performance. Faster than both the GeForce GTX 980 Ti and GeForce GTX TITAN X, the GeForce GTX 1080 is built with the very latest technology to deliver unprecedented performance and efficiency. A 16nm FinFET chip construction is employed. The new smaller chip design uses less power and emits less heat, enabling a higher core clock speed which is key for increasing performance. It is also the first GPU to support GDDR5X memory which enables higher memory bandwidth and larger memory sizes.

As always NVIDIA is supporting this latest GPU with the best drivers and development tools in the industry. Also announced are some innovative new techniques for creating truely immersive virtual reality and a new social tool for creating beautiful screenshots.

Learn more about the GeForce GTX 1080:

Join the NVIDIA Developer Program to get the news from NVIDIA : Join Now

VR is extremely performance intensive requiring high resolution stereo rendering at 90Hz. There are several new technologies in the Pascal architecture to improve the performance of graphics rendering for VR applications. These allow the GeForce GTX 1080 to perform up to 2x faster than the GeForce GTX TITAN X for VR Applications. As well as adding performance improvements NVIDIA is announcing libraries for Physically simulating sound propagation and physics for VR.

Increasingly gamers are sharing their exploits on the internet. NVIDIA Ansel makes it easy for developers to create amazing images from within the game. If a game supports Ansel, the gamer can freeze time, compose the perfect shot even in HDR and then render a high definition screenshot. Ansel even allows them to apply filters to altering the look, feel and mood of the image.

NVIDIA Ansel can be used to enhance screen shots.

Ansel can also capture 360° panoramic screenshots which can viewed on PC, with a VR headset or even with Google Cardboard.