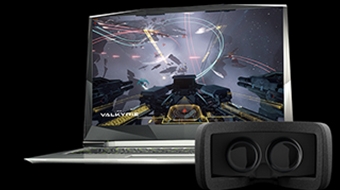 Need cutting edge gaming performance in a laptop? Our GeForce GTX 10 Series notebooks use the revolutionary PASCAL architecture and are rated as VR Ready. This means you get the performance needed to develop and run AAA content including applications for Virtual Reality.

With Pascal-architecture inside every gaming laptop, performance is up to 75% faster, offering a massive leap in generation-to-generation performance, higher than any other in the history of gaming laptops.

GeForce GTX 10-Series laptops are simply the best laptops ever. A number of enhancements have been made to the engineering of many models, including the addition of Dual-FET power supplies, Multi Phased Power Controllers, and more. This attention to detail enables GTX 10-Series gaming laptops to achieve higher peak currents more efficiently, with less power noise, further improving performance and giving many models overclocking potential. For the first time, GTX 10-Series laptops can ship overclocked from the factory, boosting out of the box performance.

In addition to improving laptop performance and overclocking, we’re also improving laptop displays with the launch of the world’s first 120Hz G-SYNC laptop displays, in addition to the world’s first 2560x1440 G-SYNC displays. Now, across the vast range of GTX 10-Series laptops, you’ll be able to choose between 1920x1080, 2560x1440, and 3840x2160 G-SYNC displays, operating at up to 120Hz. Learn more about G-SYNC.

The Pascal architecture delivers up to 30% more battery life compared to our previous generation Maxwell laptops, allowing you to work for longer in trains, planes and automobiles, and at any time you’re away from a power outlet.