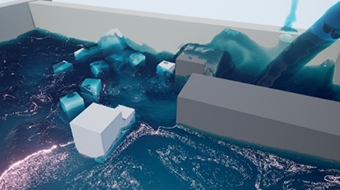 Of all the fun things we do at NVIDIA, pushing the limits of real-time physics simulation is always near the top of our list. Water simulation is a real challenge in a number of ways. First, you need a high resolution simulation (the count of particles or grid cells), especially if you want to flood a large area instead of filling a bathtub. Second, everyone knows what real water is supposed to look like, and it really stands out when you don’t get all the visual details exactly right. Third, the water should interact plausibly with other objects: things that float, that get smashed by waves, or caught in the current.

In that context, we’re very happy this week to share the results of an R&D demo project called Cataclysm. Although we spent considerable effort on the visual details, Cataclysm is primarily an effort to reach the scale of water simulation needed to flood a city scene with realistic-looking water, and we set aside for now the problem of rigid body interaction. We chose to develop Cataclysm in Unreal Engine 4 by Epic Games because it helps us to roll ideas out quickly and easily to a big community, and because the GPU particle system in UE4 offers a combination of features that helped achieve our goals without having to write everything from scratch.

The Cataclysm liquid solver can simulate up to two million liquid particles within the UE4 engine in real time. It uses a custom FLIP based GPU solver combined with Unreal Engine 4's GPU Particles with Distance Field Collisions. A FLIP solver is a hybrid grid and particle technique for simulating fluids. All Information for the fluid simulation is carried on particles, but the solution the physical simulation of the liquid is carried out on a grid. Once the grid solve is complete, the particles gather back up the information they need from the grid to move forward in time to the next frame. If you are interested in fluid solvers in general a quick web search will turn up a lot of information about FLIP solvers, and Robert Bridson's book is also a good source of information.


Results of the experiment can be seen here.

If you want to have your levels hold water, then you will need to have closed meshes for your level geometry, and they should be thicker than the Voxel Width. Meshes can be smaller, but the fluid simulation will leak through them or go around them, only noticing them as partially solid voxels.

Once the liquid and solid boundary are identified, the velocity from the particles is transferred to the grid with a sharp kernel. The divergence of the grid velocity is computed, and anywhere that divergence is not zero in a voxel we know that there is either too much liquid entering the voxel, or too much leaving it. A technique known as pressure projection is used, where we utilize a change in pressure to find the velocity that will make all the voxels have as close to a zero divergence as possible. The important thing for the FLIP technique is not how we get to a final velocity with a zero divergence, but that we keep the velocity from before and after the solve.

You’ll find more details and all of the code to our FLIP solver implementation here on a fork of Unreal (requires Unreal account to view):