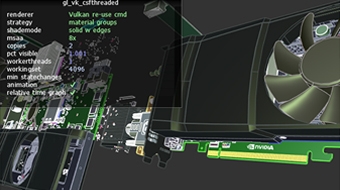 We have released various Vulkan samples on our professional graphics repository. In this post we present some details of the “threaded cadscene sample”.

The sample allows comparing various rendering approaches using core OpenGL, extended OpenGL via bindless and NV_command_list as well as Vulkan. It currently does make use of NVIDIA specific extensions to use Vulkan within an OpenGL context and display a Vulkan image.

The content being rendered in the sample is a CAD model which is made of many parts that have few triangles. Having such low complexity per draw-call can very often result into being CPU bound. The sample is a fork of the public cadscene OpenGL sample and introduces the usage of multiple CPU threads.

By default a performance graph is drawn that illustrates the relative costs for rendering. The top green bar represents GPU time, and the lower blue bar CPU time. The bar that extends to the maximum is the primary bottle-neck. Be aware that the GPU costs may be appear higher than actual, when very CPU bound as discussed below in the performance section. When cloning the model multiple times, the scene complexity is increased, the sample does not use instancing for this, but generates actual bindings/drawcalls for the new objects. An animation effect can be activated to “extrude” the model by modifying the matrices on the GPU.

Solid with edges: triangles and edge outlines on top (using polygonoffset to push triangles back). When no global sorting (see later) is performed, it means we toggle between the two modes for every object. Alongside the mode changes is a shader change, so that wireframe is unlit. The shader change for that effect is not really necessary, and toggling so often is not optimal, but it creates some artificial load for the graphics api.

When the “min statechanges” option is enabled, we will draw first solid then edges, effectively reducing the number of shader changes dramatically.

Upon renderer activation the scene is traversed and encoded into a list of “drawitems”. Optionally this list can be globally sorted once with the “min statechanges” option. All renderers operate from the same “drawitems” list.

By default all renderers also use the same state and binding sequences. VBO/IBO bind per geometry change, a uniform buffer range bind per material and a matrix change.

Preliminary Results: The Vulkan driver is still very new and the performance numbers are therefore not final. The benchmark was run on a Quadro M6000, with a first generation i7-860 CPU.

Important Note on GPU timings The GPU time is measured via timestamps. If the "begin" timestamp is in a different driver submission to the GPU (aka pushbuffer) than the "end" timestamp, then CPU bottlenecks will skew the GPU timings. The CPU time between submissions will impact the reported GPU time. This may be the case when very many GPU commands are created per-frame, although it typically affects OpenGL more than Vulkan.

To get more exact timings about the relative cost of each section, the application does measure the CPU time for the "flush" (Vulkan vkQueueSubmit, OpenGL glFlush) as well. The application does three flushes when animation is active, and two otherwise.

In this scenario we generate around 44k drawcalls all using the same shader. The cost of uniform and geometry buffer binds as well as drawcalls (average ~50 triangles) dominates.

Our CPU costs are nicely reduced with Vulkan and scale with more threads. By re-using command buffers we can remove the CPU costs almost entirely. We can also see that the re-use of many tiny command buffers is not recommended (in this scenario around 10k secondary buffers per-frame).

The NV_command_list can be a tad faster than Vulkan on the CPU-side, as it benefits of having the API designed directly for the hardware in mind. There is no function calls and the data is formatted in a hardware friendly way. It is expected that Vulkan's performance will improve or that similar mechanisms will be exposed.

Now we render edges on top of the surfaces. We still generate around 44k drawcalls but half are for triangles, the other for lines. Within every object we toggle between the two and change the shader (not optimal but serves as stress test). The cost of those shader changes now dominates.

In this scenario we can see that the modern principles of Vulkan (and NV_command_list) are on a whole new level when it comes to CPU efficiency (and NVIDIA's Quadro OpenGL driver is well-optimized). The shader toggles are just way too costly for a classic graphics API approach.

The NV_command_list doesn't scale with CPU threads as the shader state switching is handled on the main submission thread in a serial fashion. Vulkan, however, still can scale by using more threads.

Overall Vulkan is a big improvement over unextended OpenGL, especially re-using CommandBuffers can result in greatly reduced CPU cost. In this particular sample NV_command_list is often very similar to Vulkan, which does show that OpenGL with proprietary extensions can be very fast. In pure draw-call limited scenarios core OpenGL's MultiDrawIndirect can also be very efficient as seen in another sample.

It should be noted that this sample only uses two pipeline objects (or state-objects in OpenGL) and the rest of the scene's resources are static as well. That means vulkan cannot make use of its greatest strength: generating and validating resources in parallel. Therefore, benchmarks in samples like this are very directed at a certain problem and only a snapshot of an APIs capability.