Reading Between The Threads: Shader Intrinsics 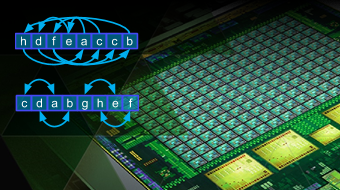 When writing compute shaders, it’s often necessary to communicate values between threads. This is typically done via shared memory. Kepler GPUs introduced “shuffle” intrinsics, which allow threads of a warp to directly read each other's registers avoiding memory access and synchronization. Shared memory is relatively fast but instructions that operate without using memory of any kind are significantly faster still.

This article discusses those “warp shuffle” and “warp vote” intrinsics and how you can take advantage of them in your DirectX, OpenGL, and Vulkan applications in addition to CUDA. We also provide the ShuffleIntrinsicsVk sample which illustrates basic use cases of those intrinsics.

The intrinsics can be further divided into the following categories:

The vote and shuffle intrinsics (not fragment quad swizzle) are available not just in compute shaders but to all graphics shaders!

How Does Shuffle Help?

There are three main advantages to using warp shuffle and warp vote intrinsics instead of shared memory:

Where Can Shuffle Help?

During the port of the EGO® engine to next-gen console, we discovered that warp/wave-level operations enabled substantial optimisations to our light culling system. We were excited to learn that NVIDIA offered production-quality, ready-to-use HLSL extensions to access the same functionality on GeForce GPUs. We were able to exploit the same warp vote and lane access functionality as we had done on console, yielding wins of up to 1ms at 1080p on a GTX 980. We continue to find new optimisations to exploit these intrinsics.

There are quite a few algorithms (or building blocks) that use shared memory and could benefit from using shuffle intrinsics:

As always, it’s advisable to profile and measure as you are optimizing your shaders!

NVIDIA GPUS, such as those from our Pascal generation, are composed of different configurations of Graphics Processing Clusters (GPCs), Streaming Multiprocessors (SMs), and memory controllers. Threads from compute and graphics shaders are organized in groups called warps that execute in lock-step.

On current hardware, a warp has a width of 32 threads. In case of future changes, it’s a good idea to use the following intrinsics to determine the number of threads within a warp as well as the thread index (or lane) within the current warp:

The “ShuffleIntrinsicsVk” sample contains a rendermode which maps the lane id within a warp to a color, as illustrated by the following figure:

The “ShuffleIntrinsicsVk” sample demonstrates how the ballot intrinsic can be used to color code the first and last thread of a warp:

They all load a value from the current thread, which can be different per thread, and return a value read from another thread whose index can be specified using various methods, depending on the flavor of shuffle. The subsequent discussion of the individual shuffle functions makes use of the following terms:

Note: When a shuffle function attempts to access the value of from an out-of-range thread, it will return the value of the current thread and set threadIdValid to false (if provided as an argument). This is typically not a problem, for example when computing a min/max reduction across the warp, but might need special consideration when computing a sum across the warp.

This intrinsic allows a thread to read the value from any thread within the thread group.

Here, index directly specifies the source thread / lane and must be in the range of 0 to 31.

Shuffle Up and Shuffle Down

The shuffle up and shuffle down intrinsics differ from the the indexed shuffle, since they determine the index of the source thread by adding/subtracting an offset to the current thread index within the warp.

Here, the delta argument is the offset that gets subtracted (shuffleUp) or added (shuffleDown) to the current thread id to get the source thread id. This has the effect of shifting the segment up or down by delta threads.

The butterfly (or XOR) shuffle does a bitwise xor between the lane mask and the current thread id to get the source thread id.

The laneMask parameter specifies value that gets “xor”-ed with the current thread id to get the source thread id.

This can be used to perform a reduction across the warp as shown in the “ShuffleIntrinsicsVK” sample which computes the maximum of a color value across the warp.

There are a few commands in the HLSL and GLSL standard libraries that rely on data from neighboring fragments, e.g computing screen space derivatives or the computing the LOD for texture lookups. For those, our hardware groups fragment shader invocations into 2x2 grids (so called “quads”) and then uses specialized variants of cross warp data exchange as building blocks for the standard library functions.

The quadSwizzle intrinsics (currently GLSL only) expose those building blocks to application developers. There are 6 of those functions that allow fragments within a quad to exchange data:

Replicate the value of a single thread across the quad:

Note: If any thread in a 2x2 pixel quad is inactive (i.e. gl_HelperThreadNV or gl_HelperInvocation are false), then the quad is divergent. In this case, quadSwizzle*NV will return 0 for all fragments in the quad.

All intrinsics discussed in this article are available on our Kepler, Maxwell, and Pascal GPUs, across our Quadro and GeForce graphics cards as well as on our Tegra K1 and Tegra X1 mobile GPUs.

HLSL for DirectX 11 and DirectX 12

NVIDIA provides a mechanism for using the intrinsics from HLSL in DirectX 11 and DirectX 12. Make sure to check out Alexey’s article on how to access the intrinsics using our NVAPI library.

GLSL for OpenGL and Vulkan

Most differences between those are minor (“SubGroup” vs “Warp”, “Invocation” vs “Thread”); notable however is that the ARB extensions support implementations with maximum warp widths of 64, whereas the NVIDIA extensions assume a maximum warp width of 32 threads. This is mostly transparent to a shader developer, except that ballotARB returns the bit mask as a 64-bit integer, unlike ballotThreadNV, which returns the bitmask as a 32-bit integer.

For reference, here is how we roughly implement the cross-vendor intrinsics in terms of our native hardware functionality:

The GLSL extensions discussed above are already supported by our Vulkan drivers via VK_NV_glsl_shader, which makes them available for experimentation today!

In parallel, we are also working with the respective Khronos working groups in order to find the best way to bring cross-vendor shader intrinsics already standardized in OpenGL over to Vulkan and SPIR-V. We are furthermore working on Vulkan and SPIR-V extensions to expose our native intrinsics, but prioritized the cross-vendor functionality higher, especially since there is notable overlap in functionality.

The ShuffleIntrinsicsVK sample is available on Github (Source, documentation) It renders a triangle and uses various intrinsics in the fragment shader to show various use cases.