Physics and Simulation at GDC17 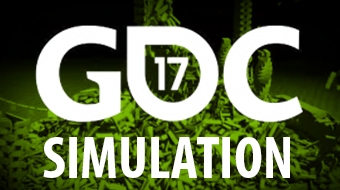 If you are a simulation programmer looking to take your game to the next level of interactivity we have loads of great content for you at GDC. We have talks on D3D Asynchronous compute, GPU accelerated rigid bodies and a talk on advanced animation techniques in Unreal Engine 4. Be sure to attend our sponsored sessions and also stop by the booth, talk to the engineers and try the demos.

In this explosive talk we provide a sequence of successively more complicated D3D compute particle effects. We start from a non-interacting particle system, adding effects until we reach unified debris, cloth and fluid simulation, noting the incremental GPU cost of each. Developers can now take advantage of unused GPU cycles to add bigger, crazier particle simulations to their games.

Game Physics on the GPU with NVIDIA PhysX 3.4

Improvements in PhysX-3.4 allow developers to increase the scale of their simulations. GPU Rigid Body simulation can simulate and render tens of thousands of rigid bodies in real-time. The talk covers the core features of the engine as well as how to integrate it along with performance figures.

Two new GameWorks technologies, PhysX Immediate Mode and NvCloth make it easy to add secondary motion to game characters. In addition to introducing these new technologies, we will provide details of how they have been used in UE4 to improve behavior and performance.

NVIDIA has 16 sponsored sessions at GDC this year. For full details head over to our GDC page. We’ll also have a booth packed with the latest and greatest in game development technology. We’ll see you at the show!