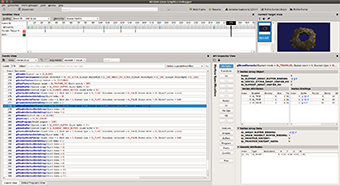 Linux Graphics Debugger 2.2 is available for download under the NVIDIA GameWorks Registered Developer Program. This 3D graphics development tool allows developers to debug and profile OpenGL 4.x on Linux. It enables professional graphics developers to get the most out of their NVIDIA GeForce and Quadro GPUs on a variety of Linux distributions, and inherits from the many man-years of investment in OpenGL development tools from the Tegra Graphics Debugger and NVIDIA® Nsight™ Visual Studio Edition.

Release 2.2 adds enhancements to the Performance Dashboard, API Inspector, Events, and Target views as well as improvements in shader performance, frame capture serialization, remote debugging, and unsupported function logging. This, along will a number of bug fixes and workflow improvements makes version 2.2 the best Linux Graphics Debugger yet.

The NVIDIA® Linux Graphic Debugger has been updated with these new version 2 features: