GDC 2008 is done -- the event saw our Expo Suite location packed continuously with developers, and our sessions were well attended too. See you next year!

Below you'll find descriptions, videos, and PDF slides from NVIDIA's sessions at GDC 2008.

NVIDIA developers will be presenting once again at this year's GDC in San Francisco. This is your chance to see new material directly from the same team that brought you the Frontline Award Winning GPU Gems series.

Rendering realistic human skin represents one of the toughest challenges in computer graphics. In this session, attendees will learn about an extremely realistic, physically-based real-time skin shader that is easy to implement and highly scalable for optimal performance.

The computational power of modern GPUs has reached the point where realistic free-flowing fluids can be simulated and rendered in real-time. This talk will provide an overview of fluid simulation techniques for games and then describe in detail the advantages of particle-based simulations and how they can be implemented efficiently on the GPU. 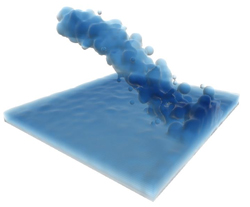 3D stereoscopic movies - such as Beowulf 3D and U2 3D - are the cutting edge of immersive entertainment experiences by putting the viewers directly in the movie. Consumers will expect the same from their 3D games and applications. This talk will cover equipment, software, setup, and configuration, including an overview of NVIDIA's 3D stereo mode implementation. Attendees will learn guidelines for maximizing the 3D stereo effect, going over what works well, and what does not.

Find out how to take full advantage of your GPU using NVIDIA's suite of GPU performance analysis tools for both DirectX and OpenGL. Attendees will learn how to measure and correct GPU bottlenecks with the latest PerfHUD, and to query performance counters with PerfSDK. The talk will also include an independent real-world case study from a popular shipping game.

FX Composer 2 is a comprehensive shader development environment for programmers, artists, and technical directors that supports DirectX and OpenGL, and HLSL, Cg, and COLLADA FX shaders. This session will highlight new features such as a source-level shader debugger for Cg and HLSL10 shaders, Direct3D 10 support including geometry shaders, and particle systems.

NVIDIA staff will also be giving other talks in different venues around GDC, including:

Brought to you as the collaboration between the industry's leading hardware and software vendors, this day-long tutorial provides an in-depth look at the Direct3D technologies in DirectX 10 and how they can be applied to cutting-edge game graphics.

Beyond Printf: Debugging Graphics Through Tools

This presentation utilizes freely available products made by a variety of vendors and focuses on prioritizing tool selection and use.

This lecture does a review of multiple depth-buffer-based ambient occlusion techniques. Three of the described algorithms are ray-marching in the depth buffer, an algorithm based on accumulating solid angles, and a new hybrid method called tangent tracing. Real-time demonstrations included!

NVIDIA and multiple game studios, will provide a toolbox of techniques for programmers interested in creating physics engines, with focus on various pieces of the simulation pipeline, and will show how problems along the way can be solved and optimized using standard concepts, know-how, and sample code.

Besides NVIDIA's own booth, you'll find NVIDIA as a featured part of these partners' presence at GDC 2008:

These videos show what a slide deck cannot: the original speaker(s) and their on-the-spot demonstrations of interactive NVIDIA technology. Four videos are available: