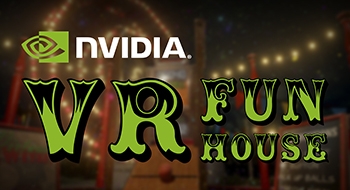 Last week we announced the release of our VR Funhouse Mod Kit allowing developers and hobbyists to create new experiences using Unreal Engine with integrated VRWorks and GameWorks technologies. This week, we are excited to announce a VR Funhouse Game Jam in partnership with Epic Games, Valve and HTC in Hamburg, Germany on the MS Bleichen (September 24-26).

Teams have already been selected, they'll be working around the clock for 48 hours onboard an historic ship to create awesome new VR experiences. Then on Monday September 26th, the Showcase event will open to registered attendees who will come aboard to try their creations. It's sure to be an amazing event.

You can get tickets for the Showcase event by following this link.

Can't make the event but interested in learning more about modding VR Funhouse or getting complete source code access? Don't worry we've got you covered. In fact you don't even need a VR Headset to experiment with the Mod Kit. Just check out these resources:

Get started by watching this training video: