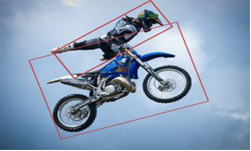 Object detection and classification in imagery using deep neural networks (DNNs) and convolutional neural networks (CNNs) is a well-studied area. For some applications, these AI approaches are considered to be reliable enough to use in production with minimal intervention. Popular methods include YOLO, SSD, Faster-RCNN, MobileNet, RetinaNet, and others.

In most application contexts, imagery is collected from an egocentric viewpoint (like a mobile phone camera), with most objects being aligned vertically (a person) or horizontally (a car). This means that most of the objects in the image can be considered to be axis-aligned and can be described by four bounding box parameters: xmin, ymin, width and height.

However, there are many cases where objects or features are not aligned to the image axis. In those cases, the four parameters do not describe the object outline with high precision.